Massively Multiplayer Online Roleplaying Games (MMORPGs or just MMOs) have been popular for the past fifteen or more years. However, while they have the words “Roleplaying Games” in them, the games can and do exist for many players without them doing any roleplaying. There are hardcore PVP groups, hardcore PVE groups, and, yes, there are roleplaying groups, but it is not a requirement to play and enjoy the game. This fact, and the fact that these are video games, often with puzzle-like mechanics for major combats and memorized “rotations” of moves for other fights, distances them from tabletop roleplaying games. There are many people, especially in the recent surge of popularity for TTRPGs, who have never played MMORPGs, and many people who think that MMORPGs have nothing of value to teach us when it comes to TTRPGs. I disagree; MMORPGs do many things well, in particular when it comes to combat, that I believe DMs and GMs can add to their own games to make combats more interesting.

The only MMO I have played is Star Wars: The Old Republic. MMOs as a concept never really appealed to me, but I figured I would try it because 1) It was Star Wars, and 2) It was made by Bioware. I intended to play primarily for the story, but ended up joining an awesome guild called Remnants of Hope and getting into all aspects of the game heavily (PVE, PVP, and roleplaying). I stepped away from playing regularly in 2015, but recently returned to simply play through the new story content. It was while playing through the story content and relearning both how to play and also the new mechanics that bosses had that I realized how much MMORPGs had to offer to DMs/GMs. A common thinking trap for DMs/GMs is trying to make their monsters or enemies conform to preexisting abilities and rules in the rulebook; so what if PCs can only ever get 4 spell slots of a certain level? This boss has 6 3rd level spellslots! Or no spellslots at all! Do not feel like you have to conform your enemies to the same rules as players, and with that in mind, let’s see what kind of abilities we can bring from MMOs into TTRPGs. 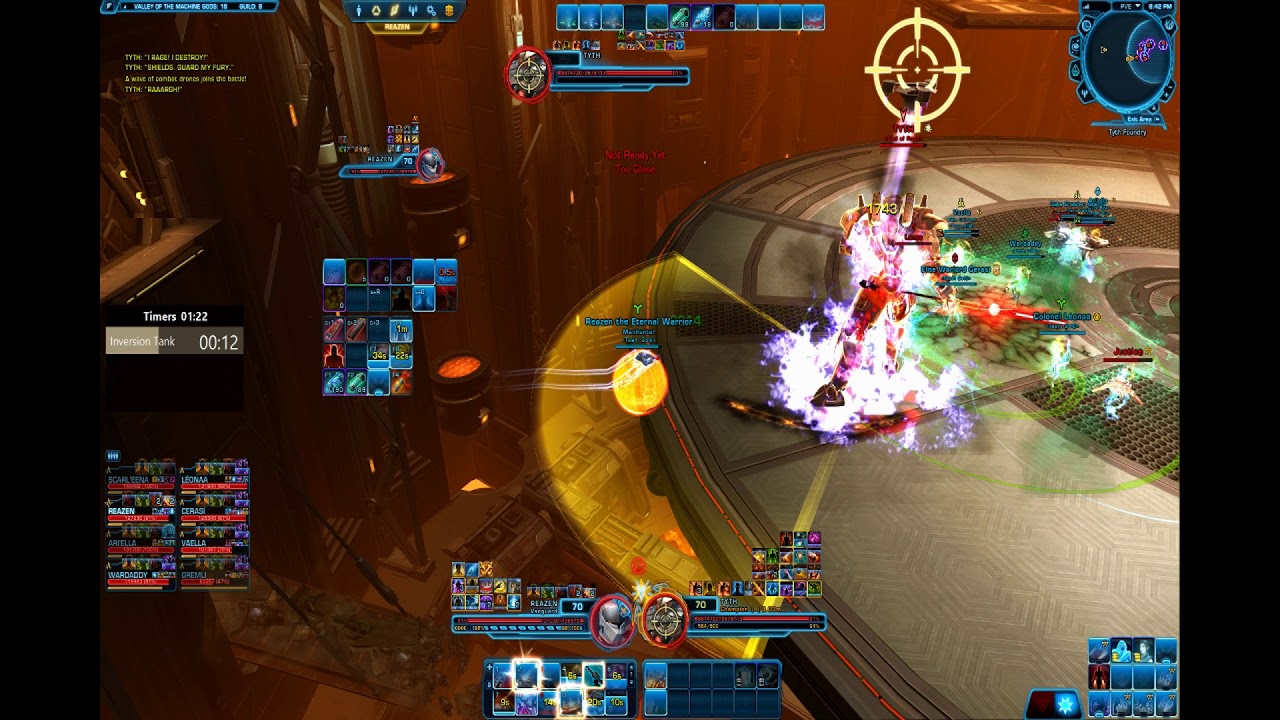 The first thing that is common to many MMORPG bosses is positional attacks. Because the bosses, particularly in raids, are designed to be fought by groups of between 4 and 8 players, these bosses normally have powerful attacks that hit players based on their positioning. For example, they may have a knockback attack that hits in a frontal cone, or a stomp attack that hits all players within 3 meters, or even a powerful beam attack that hits everything in a straight line 5 meters wide until it reaches a wall or other solid object (SWTOR distances are measured in meters, which is why I’m using them as a point of reference). These types of attacks are great to bring into TTRPGs because combat can often stagnate, especially if there are many close-combat players as there often are in fantasy RPGs (this is less of a concern in modern or sci fi RPGs since most players are ranged combatants, and will move and maneuver to get the best cover and rarely get locked down, but the principles can still apply). Combat in games like Dungeons and Dragons can quickly break down into everyone rushing the boss and then sitting there, not moving, for round after round, beating on the boss until it goes down. Now, some bosses already have positional attacks, such as a dragon’s conical breath weapon, or even spells like lightning bolt, but even these usually turn into afterthoughts. The goal of positional attacks is to make players aware of them and then force them to make decisions because of the anticipated effects. They can keep combat dynamic, and make the encounter more fun and hopefully more memorable.

An example of a positional attack that we could bring into a game like Dungeons and Dragons is the aforementioned knockback attack. This could be an appropriate ability for a large creature like a Hill Giant that has a good reach. Simply stated, the Hill Giant, once per round, forces every enemy within 10 feet in a 180 degree arc in one direction to make a Strength saving throw; if they fail, they take 1D8+5 bludgeoning damage and are pushed back 10 feet and knocked prone. If they succeed, they take half damage and are not pushed back or knocked prone. Since the ability only affects a “frontal arc,” the players can begin to position themselves, forcing themselves and the DM to both make decisions about what they are going to do and where they are going to go. Another positional-style attack is some sort of whirlwind. Let’s say the players are fighting a Drow assassin wielding two scimitars. Normally, this assassin would only get two attacks. The players rush him and surround him to prevent his escape, only to discover that he suddenly makes a whirwind attack; he makes a single weapon attack against every enemy within reach, whether that is two or six. This ability not only makes a single enemy much more deadly, but will again force players to think about where and when they position themselves once they know the enemy has this ability. A final positional ability can be a conical ranged attack, and for this I will use Fantasy Flight’s Star Wars or Genesys rules. Similar to the whirlwind attack, this involves making more attacks than normally possible, but with other restrictions attached. Of course, the boss should have some sort of suitable ranged weapon, such as a repeater or a rotary cannon. The ability could be called Relentless Barrage, and state that the boss makes a single weapon attack against any number of enemies who are within Short Range or Engaged with each other, but increases the difficulty of each subsequent attack past the first by 1. No matter what type of ability you decide to give, attacks that focus on players’ positioning relative to the boss or to each other can make combats more interesting by making players think deliberately about where they put themselves.

The second mechanic type we can take from MMOs is similar to the positional attack, and this is the moving attack. In SWTOR, a few bosses have an ability where they can summon or launch ranged attacks that home in on targets, forcing the unfortunate target to attempt to evade it. These are abilities which can easily be ported over into TTRPGs. Imagine a wizard, or a Sith Lord, summoning balls of lightning and cursing one or more players with them. Said balls of lightning move at 30 feet per round, lasting for three rounds, and if they hit a player, deal 6d6 points of lightning damage to a target. This forces players to remain moving, otherwise they could deal with damage from an ability which occurred up to three rounds ago. Alternatively, you could have the “homing missiles” inflict a status effect, such as paralyzing the target for a single round or giving them disadvantage for a number of rounds. The important thing to keep in mind here is to not give the “missile” the ability to take away a player’s action through its movement. If a player can move 30 feet and the missile can move 40 feet, they will eventually have to give up their action to get away, which is not the intent; players not being able to do cool things on their turn is no fun.

The third mechanic I’d like to talk about today is the concept of “adds,” or additional enemies that the players have to fight. In MMORPGs, adds are usually enemies who deal little damage and are easily killed, but the threat they pose is in numbers: if the players do not divert time and attention to kill the adds, their damage can add up and their numbers can multiply. Boss fights in RPGs can often end up just being a boss alone, or a boss with a few minions, but once those minions are killed, it turns into just the boss, with everyone rushing in and beating on it until it dies. In MMOs, however, the boss usually has the ability to call adds multiple times throughout the fight, constantly drawing the player’s attention. This is easily replicated in a TTRPG. Either give the boss an ability to literally call more minions to him by shouting, over a comlink, or something similar, and have the minions rush into the room to engage in battle; or give them a magical ability where they can summon or raise minions, like skeletons, near-instantaneously. Again, as I mentioned earlier, don’t be afraid to go outside the rules as written to do this. Yes, Animate Dead in D&D takes 1 minute to cast, but wouldn’t it be much cooler if, in the midst of a battle, a Necromancer can just point at a pile of bones, command, “Rise!” and add a skeleton to the battle? I’ve personally used this exact ability in my D&D game and it does little to unbalance the battle. The thing to remember when bringing adds into battles is that they need to be relatively harmless individually and be easy to kill; a single hit should do most of them in. You want to force your players to make interesting decisions about what to do on their turns, not overwhelm them with enemy attacks and bags of lots of hit points.

If you look to your favorite MMO, or if you don’t play, just do some research online about bosses and their abilities, I’m sure you can find plenty of inspiration for interesting bosses and encounters. I’ve barely scratched the surface during this post about the kinds of things you can add to your game, and I hope it’s been helpful.